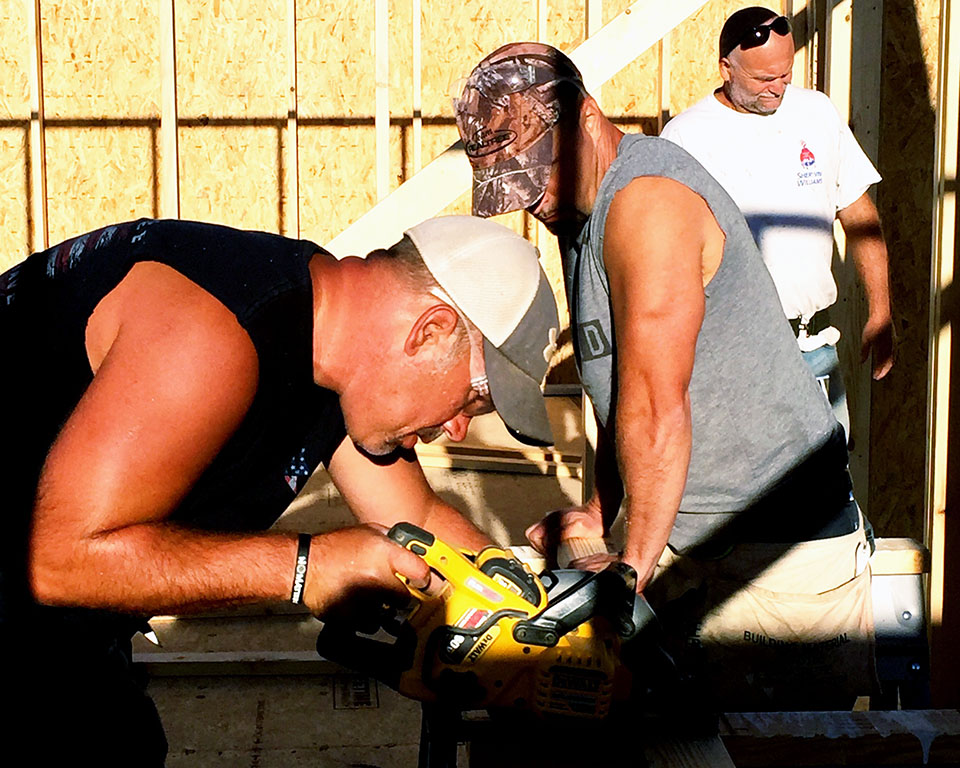 Hope Building is HDA’s paid, on-the-job training program for men and women in recovery. David’s story provides an intimate view of the trainee experience. After completing his training, David went on to secure full-time employment in Knott County.

After successfully completing the first phase of his recovery program at Hickory Hill Recovery Center, David Partin found himself at a crossroads, wondering what next step he needed to take.

“I was just stagnating without a job,” David said. “But then, Mike Nix (the director of Hickory Hill) told me and a friend about HDA’s Hope Building program. We signed up that same day.”

Even though he was skeptical about his chances in the program – having very little construction experience, David decided to stick with it after an interview with HDA carpenters and lead Hope Building trainers Matthew Pratt and Lonnie Walker.

“I knew it was going to be okay right then,” David said. “And I was right! They’re a great couple of guys. They’ve got patience like you wouldn’t believe, and they’re willing to let you make mistakes. They’ve got a real good way of working with you and showing you how to do things. Plus, they’re good storytellers, and I enjoy a good story.”

David’s work each day – the techniques he was taught, the quiet lessons he learned about himself, and the many helpful conversations he had with his fellow trainees and HDA carpenters – was itself a story that he was telling nail by nail and board by board.

“Anybody can use a hammer and nail, but when it gets to the cutwork, the sheeting, and the flooring – when you get right down to what all goes into a house and you do it all from start to finish, it’s a really big feeling to achieve something like that,” he said. “You look back at it, and it’s beautiful.”

HDA has successfully brought the new program through its first year, with trainees reporting that it’s given them new confidence, friends, and a growing belief in themselves. Perhaps even more importantly, they say the program has given them the chance to be a part of a community.

“That’s part of what I knew I was missing all along,” David said. “It kind of makes you feel whole.”

"It's weird now, when I look back at it. How it all kind of just fell into place. It's like a God thing, and it'll probably never happen again in my life. It's a beautiful experience," he said.

For David, one of the most uplifting aspects of the program has been seeing all of the different people who drop by the work sites to see what Hope Building is doing – from HDA Executive Director Scott McReynolds to Perry County Circuit Judge Alison Wells (who also presides over Perry County Drug Court) and curious members of the community.

“Seeing that mix is so important, because it let’s me see that it’s possible. People have to come together,” David said. “That’s what it’s going to take, especially in small areas like this. The stigma is what hurts us the most. We have to give each other a chance, and I think this program is a perfect example of that.”

For men and women in recovery, finding, securing, and maintaining a job is key to sustaining their recovery journey. But in small towns, where people often hear tales about folks before ever meeting them, local employers often have a hard time trusting those in recovery with jobs that would give them meaningful work and a living wage.

“It means a lot to be able to show the community that we can build a house, that we can complete a job on time and efficiently,” David said. “And it’s a win for everybody! It’s helping us and the community, but it’s also building a home for a low to middle-income family who’s really, really needing it.”

Hope Building trainees learn something new every day, and they will be expected to put their training to good use as the program plans to build 15 homes in 3 years.

“Finishing this first house has been an incredible experience,” said David. “It makes you proud. And I mean, that house has been a long time coming! We had so many struggles along the way, so much happened from Point A to Point B. Digging the footer was a beast, and that was Day One. But it’s a lot like recovery. I had to realize things aren’t going to be perfect.”

David compared the recovery journey to what it’s like to work on the framing of a house.

“That’s what Matt and Lonnie (HDA trainers) taught me. As long as you’re within an eighth of an inch, put a nail in it. It’s going to work out. It’s going to be okay,” he said. “That’s like life. If you’ve got to put something together just to move on, that’s all right. It’s not the end. Just take it a piece at a time.”

Hope Building’s first house was completed and sold in February of 2020. The 1400-square foot house boasts many firsts for an HDA-built home, including a two-car garage, cathedral ceiling, and an open concept kitchen and living room.

Seeing the finished product is a crown of achievement for David, which has made the sacrifice of being away from his family worth it.

“It does get rough sometimes,” he said. “Now and then, I feel like I’ve jumped out into something that’s a little too high for me, and I’ve struggled. But the people I have around me now – the guys at Hickory Hill and the people in Hope Building – catch me every time.”

"I think about how far I’ve come, like all the things I’ve put back together in my life now. Like my relationship with my family – my mother and father, specifically. I realize now that some things – just in the waiting period (in the recovery journey) – there’s time in between there and there’s nothing you can do with that time. It just takes time to get better."

The training David received in Hope Building helped him land a full-time job as a Peer Mentor, helping other men navigate life in recovery.

“It’s a big responsibility, and I know I’m going to learn a lot,” David said about his new job. “As the men progress, I’ll get to know a lot of them on a personal level. I’ll learn a lot about their lives, and hopefully, I can add something positive to them. And they’re going to help me in the same way, because that was me that came there that first day – broken and sick and disgusted and tired and all those things you bring with you in your bags.”

The whole experience has helped him see just how critical a job is to building a life in recovery, David said.

“It’s a way of life,” he said. “It’s your responsibility. And you have to pay your way through. You get up, suit up, show up, and put the time in. That’s the thing that helps the most, I think – people expect you there, so you get there.” 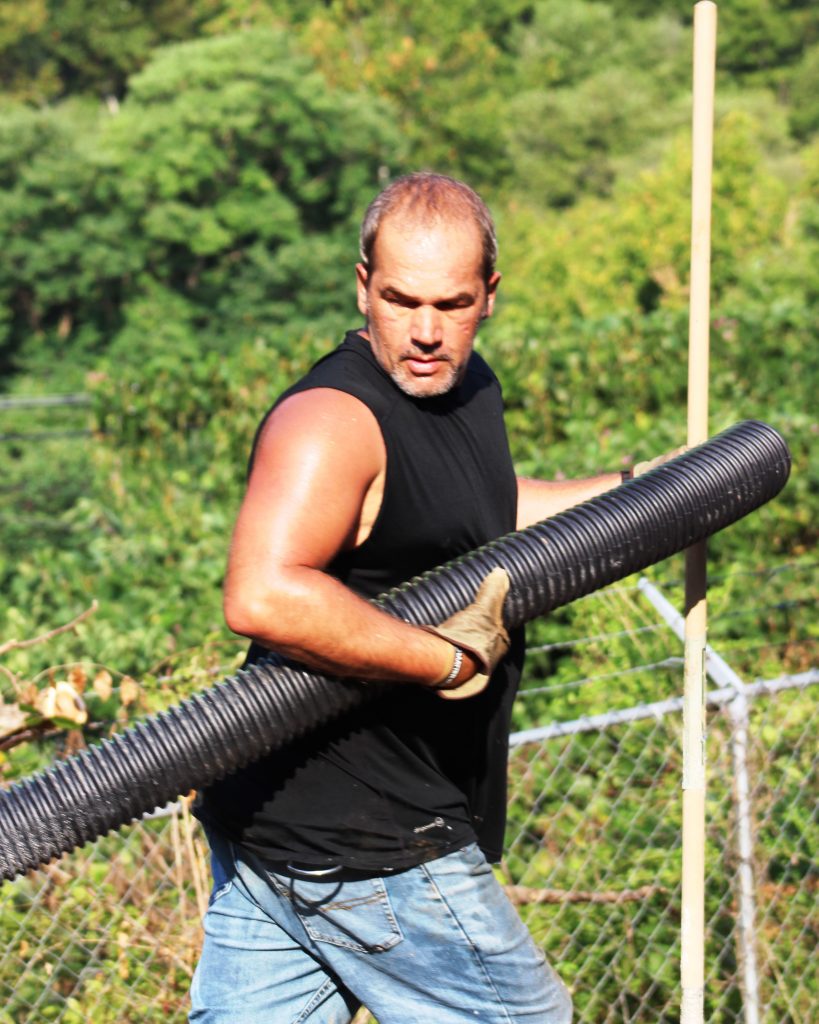 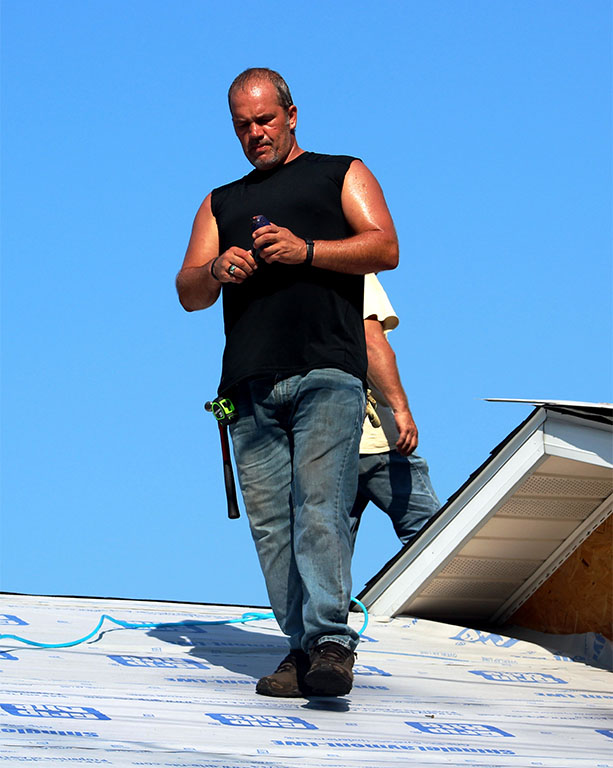 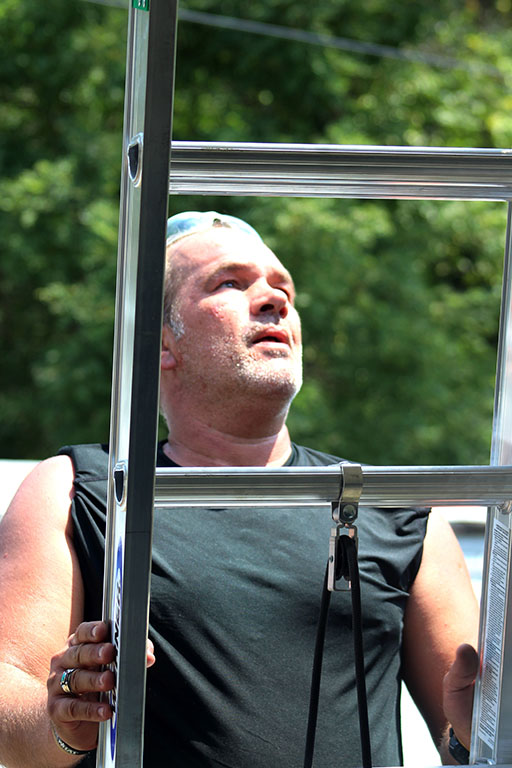 In only its first year of operation, six Hope Building trainees have gone on to secure full-time employment in the community, while five new trainees have joined the program. Our trainees have been hired as peer mentors, construction workers, and in maintenance. David said that he and the other trainees have recommended the program to other men at Hickory Hill Recovery Center, letting them know that the program is “real and true and that it works.” The biggest draw for many of the men, in addition to the training, is the education component, which allows them to earn college certificates from the local community college.

So far, Hope Building trainees have built two new homes and have two more under construction.

"It’s good to be doing something. Even if it’s in the mud, the wind, and the rain," David said. "I'm so grateful, because this program has made a big difference in my life. To anybody that’s sitting still and feels like they’re not growing, you definitely need to move into something like this!"
Facebook
Twitter
LinkedIn

Having a home should not be a hardship. Help make homes more affordable for East Kentucky families!

If you would like to take part in HDA’s Volunteer Program or in an HDA Volunteer & Fundraising Event, please fill in your details below.